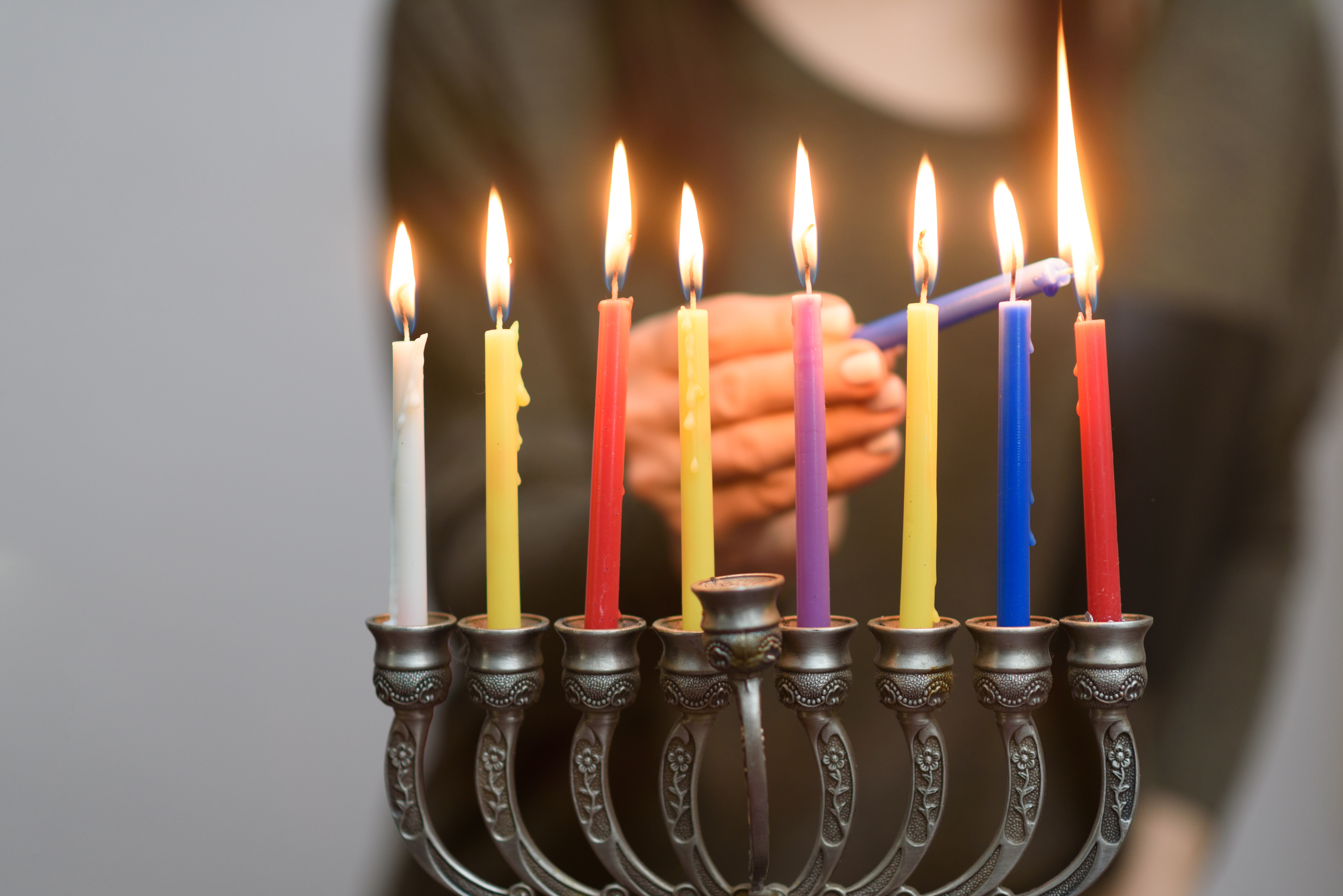 Hanukkah or Chanukah is a Jewish celebration that takes place in November or December for 8 days. This festival commemorates the recovery of Jerusalem and the rededication of the Second Temple. The word Hanukkah, which is Hebrew, translates to ‘dedication’. The holiday is centered around the nightly lighting of the menorah and is celebrated with traditional foods, games, and gifts. It is also known as the Festival of Lights.

Hanukkah commemorates the recovery of Jerusalem and the rededication of the Second Temple.

Judaism is the world's oldest monotheistic religion (believing in only one God), and it is the religion which Jewish people follow. Judaism believes in one God who communicates with Jewish people through prophets, he rewards the good and punishes the evil. Places of worship are called synagogues, their spiritual leaders are called rabbis, and their text of worship is called the Tanakh, the Torah is the first section of this text, which outlines laws Jewish people should follow. Most Jewish people believe that their Messiah has not yet come, but one day will.

Activity Idea: The website Judaism 101 is an online encyclopedia that answers questions about Jewish people, faith, language, holidays, and much more. If students would like to learn more, they can read through it.

The history of Hanukkah begins around 200 B.C. with Antiochus IV Epiphanes, the king of Syria and ruler of Jerusalem (the land of Israel, where Jewish people lived). He forced the Jewish people to worship Greek Gods by outlawing the religion of Judaism and making many Jewish cultural practices punishable by death. In 168 B.C. the king ordered his soldiers to attack Jerusalem, killing thousands and destroying their holy Second Temple, which he used to erect an altar to Zeus. The Jewish priest Mattathias, and his five sons led a rebellion against the Syrian monarchy. After Mattathias’s death, his son Judah Maccabee took over and in 2 years freed the Jewish people of their oppressors. Judah and his followers rebuilt the Second temple, cleansed it, and lit its menorah. This is when they experienced the miracle of Hanukkah. If you would like a longer and more in-depth explanation about the history surrounding Hanukkah, check out this video.

Activity Idea: Complete this lesson plan with your students, at the end have them fill out the worksheet. They will gain a better understanding of the history of Hanukkah.

Judah and his followers, after restoring and rededicating the Second Temple went to light the menorah, which is meant to keep burning every night. However, there was only enough olive oil to keep the menorah burning for one night. They lit it anyway and the flame didn’t just burn for one night, but for 8 days! This was enough time for them to find more olive oil. This miracle inspired the proclamation of an annual 8-day festival.

Activity Idea: This Hanukkah Mystery gets students to uncover which hanukkiah (nine-branched candelabra) is the correct one from the information they are given. They can also read a story from a Holocaust survivor and create their own hanukkiah design.

During the 8-day holiday there are many traditions which are followed, many of them centered around the miracle of the oil. Foods fried in oil will typically be eaten such as latkes, which are potato cakes, and jam filled donuts. Children will play with four-sided spinning tops called dreidels and there will be exchanging of gifts. The main tradition is the lighting of the nine-branched menorah. A single candle gets lit each night, after sundown, by using the helper candle (called shamash) in the middle of the candelabra. Blessing will be recited, and the menorah is prominently displayed.

Activity Idea: Students can try making their own latkes by following one of these recipes. They can take this virtual quiz to test their Hanukkah knowledge. On the same website, Jewish Kids, they can play a virtual spin the dreidel. Younger kids can play this interactive online game to virtually light the menorah.